Master Man-Son-Hing has studied under Grand Master Park legacy for over a decade. Grand Master Dr. Jung Hwan Park was born in Korea and was a member of the Korean National TaeKwonDo Team. Dr. Park is an icon in the martial arts world and has achieved the elite status of a 9th Dan Black Belt in 1985. He is also a renowned author of numerous best selling martial arts books.

Master Man-Son-Hing is internationally recognized and has competed all over the world against the best martial artists. Master Chris is experienced in Taekwondo, Hapkido, Tang Soo Do and Shotokan. Master Chris holds 6th Dan Black Belt in Taekwondo and Hapkido giving him a ranking in 159th in the World Taekwondo Federation.

Developed about fifteen centuries ago in Korea, it is an art of the hands and feet. Literally translated it means:

Taekwondo as a Sport

The competitor attempts to overcome an opponent. For example, Tae Kwon Do is now an Olympic event. It is the only sport where parents and their children can be totally involved in promoting a feeling of togetherness.

Taekwondo as a Martial Art

The individual attempts to overcome one’s self. To attain control over his or her mind and body

COURTESY
Honor, Respect & Loyalty to others

INTEGRITY
Honor, Respect & Loyalty within oneself 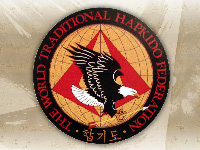 Hapkido is a dynamic and eclectic Korean martial art. It is a form of self-defense that employs joint locks, pressure points, throws, kicks, and other strikes. Hapkido practitioners train to counter the techniques of other martial arts as well as common unskilled attacks. There are also traditional weapons including short stick, cane, rope, nunchucks, sword and staff which vary in emphasis depending on the particular tradition examined.